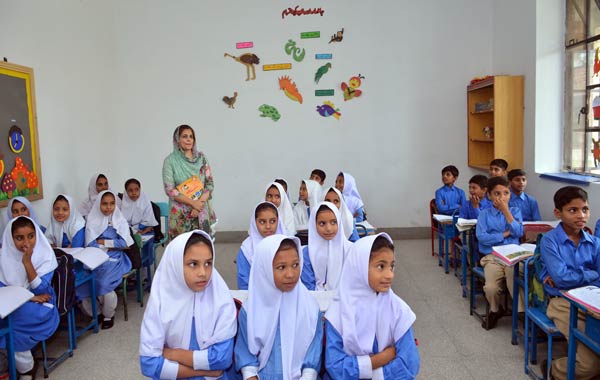 The village of Vern/Sheikhupura is located in the heart of a carpet weaving region, roughly 50 km northeast from the metropolitan city of Lahore.

In 1997, it was here that CARE & FAIR financed the construction of a large primary and middle school with a library and small medical centre. A nursery school (kindergarten) is also on site. The Vern School has been up and running since 2000. The school makes do with minimal support from Europe; from the very beginning, CARE & FAIR Pakistan has been paying the majority of the operating costs almost entirely on its own. This is made possible thanks to the tremendous personal commitment of the executive board members and the 25 current member companies.

This commitment is shared among the entire staff. Not only the headmistress, but also all of the other teachers are consumed in their work. Among other things, this is also reflected in the exceptional performance of the students. Compared to the rest of the region, the students here achieve good results above the regional average, with many earning top marks on their exams. 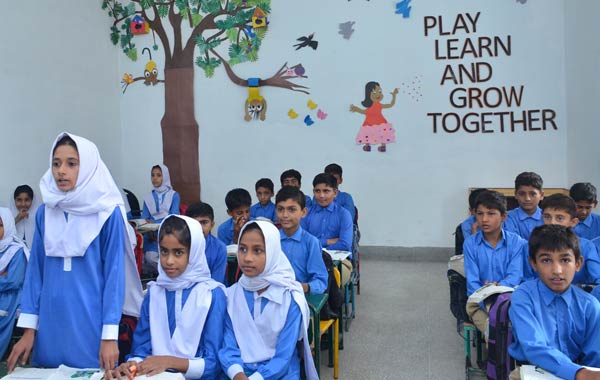 The successful Vern School project has already attracted the attention of the district, which has approached CARE & FAIR with the request that it take over the management of another state school.

In June 2008, the “Vern Boys’ School” was opened directly adjacent to the existing school. The new school also has rooms for science education and modern PC communications. Since the school opened, both boys and girls at the Vern School can attend upper level grades and graduate with a School Leaving Certificate (SLC), which roughly corresponds to a General Certificate of Secondary Education (GCSE).

Since opening in June 2000, the school has grown from 209 children and 14 teachers and staff members to 740 children, 35 teachers, 16 staff members, 1 doctor and 1 medical assistant.

Every four weeks the doctor regularly examines all of the students and documents the findings from the exams on a health card. Minor ailments and illnesses are treated immediately. In the event of more serious conditions, the children are immediately transferred to a hospital.

Khanapur, Jangiganj / Bhadohi In the knotting areas, in rural areas, there are hundreds of school-age children, but far and wide there is hardly a school. One such area is around the place of Khanapur, southwest of Bhadohi. The approximately 24,000 ...